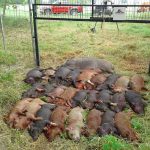 It’s no secret that wild hogs are fast becoming a serious issue across the US, and the explosion in hog numbers has been well documented by the media. In this article, we’ll look at the problems caused by wild hogs in Texas. After explaining the issue, we’ll look at some of the control measures that can be adopted – including Texas hog trapping services.

Are Wild Hogs Native to the US?

Wild hogs are not a native species in the US. They don’t fit naturally into our ecosystem and they’re not adequately controlled by natural predators. As such, their numbers have swelled and their impact on native wildlife and crops is escalating fast.

Of all the US states, Texas is most seriously affected by wild hogs. USDA estimates suggest that there are over 5-million wild hogs throughout the US1, but the distribution is far from even. Some states have no problem with wild hogs, while Texas has the largest population – thought to number around 1.5 million2.

What are Wild Hogs?

There are actually three distinct types of wild hog. The first is the wild boar – a species native to Eurasia, but not naturally found in the Americas. The second type is the feral domestic pig – these are domesticated animals which have escaped from farms. Finally, there are hybrids – the result of interbreeding between wild boar and feral domestic pigs.

Wild hogs are also known as feral hogs/pigs/swine (confusingly, these names are sometimes applied to all three forms – not only feral domestic pigs).

Hogs cause two primary problems in Texas – environmental damage and crop damage; they also spread a range of diseases.

Hogs wallow in shallow water. This behavior disturbs the beds of rivers, ponds, and lakes, increasing the levels of mud and silt. As the water becomes less transparent, fewer aquatic plants are able to survive, quickly reducing the bio-diversity of these habitats. Wild hogs also compromise the structure of river banks, destroying vegetation and encouraging erosion.

As omnivores, hogs will eat plants, bugs, small mammals, carrion – in fact, most anything they can find! Native populations of ground-nesting birds can be devastated by the predatory behavior of feral pigs – which will happily take both eggs and hatching.

Even a single feral pig can cause significant crop damage in a short space of time. But it’s common for female hogs (sows) and their litters to travel in groups – known as sounders.

A sounder may include just a small family, or several dozen hogs – and the impact of having these voracious feeders arrive en mass is devastating!

Their habit of rooting up the ground in search of food means that hogs can damage a diverse range of crops, regardless of whether they actually eat the affected plant species. In addition, pigs can contaminate crops with their urine or feces – potentially spreading pathogens to humans, or to livestock fed on the crops.

USDA estimates suggest that feral pigs cost $1.5 billion per year – approximately $800 million of this is the result of agricultural damage.

There’s widespread acceptance that feral pigs in Texas represent an invasive nuisance species. It’s also widely recognized that farmers, ranchers, and homeowners have a right to protect their land and livelihood from the damage caused by hogs. In fact, the wider environmental benefits of hog control mean that trapping and hunting are not only allowed, but positively encouraged.

Hog trapping provides an effective way to dramatically reduce local populations of feral pigs. Landowners can buy hog traps and deploy these solutions independently, or employ professionals offering a Texas hog trapping service. Hog hunting is an alternative control measure and the two techniques can be used independently, or combined for maximum efficacy. At Texas Wild Hog Control, our name says it all – so explore our site to learn more about all the ways we can help you to take back control.